Mysterious Sicily - 6 days
This magnificent trail offers the opportunity to discover a mysterious and little-known part of Sicily, between the Peloritan and the Nebrodi Mountains.
Book now
Itinerary

Day 1
You will arrive in the territory of Castiglione di Sicilia, on Etna's northern slopes.  You will have supper and spend the night here.

Day 2: Castiglione di Sicilia-Agriturismo Buongiorno (hours of riding: 7)
After breakfast we will begin the trail, riding along tracks immersed in woods of hazel and chestnut, to reach the Alcantara River.  We will then ride around Castiglione di Sicilia, one of the island's oldest villages, before riding along a disused railway track, which will take us by bridge across the river, just before entering Francavilla di Sicilia, another village of remote origin.  From here we will ride out into the riverbed of the San Paolo River, which is almost dry for most of the year, before beginning to climb the southern slopes of Montagna Grande, the highest peak of the Peloritan Mountains.  Once we reach the summit, we will ride beneath the impressive turbines of a wind farm, before beginning the descent down the other side of the mountain, towards the Agrò Valley, where we will find our accommodation, Agriturismo Buongiorno, in the territory of Antillo.  We will have supper and spend the night here.

Day 3: Agriturismo Buongiorno-Novara di Sicilia (hours of riding: 7)
From the agriturismo we will begin to climb towards the top of a nearby mountain which is home to the "Bell of Peace", in memory of all those who have been lost to war, which you can also have a go at ringing. We will then continue the ride following the ridge, from where you can enjoy spectacular views, before descending to the riverbed of the Patrì River, which skirts the village of Fondachelli-Fantina, where we will stop for a picnic lunch.  In the afternoon we will climb towards the Rock of Novara (also known as the "Savatesta"), an impressive rocky peak reaching 1340 metres, which is shrouded in a number of mysterious legends.  We will pass around the Rock of Novara before descending towards Novara di Sicilia, formerly Noa, a town of ancient origins, where we will spend the night at a historic hotel and eat supper at the nearby La Pineta restaurant.

Day 4: Novara di Sicilia-Montalbano Elicona (hours of riding: 6)
On this leg of the trail we will ride from one historic town to another, from Novara di Sicilia to Montalbano Elicona.  We will also pass from the area of the Peloritan Mountains to that of the Nebrodi Mountains.  After having ridden through Novara, we will ride in a westerly direction, passing through the village of San Basilio, before climbing up towards another line of wind turbines, before entering a forest of various species of tree, including beech trees, which are only found in Sicily at high altitude. We will then reach the megalithic site of Argimusco, where we will stop for a picnic lunch, right beneath the fascinating rock formations of this mysterious place. In the afternoon we will descend towards Montalbano Elicona.  We will ride right into the historic centre of the town and will spend the night in houses located in its oldest part.  We will eat supper at the nearby Il Focolare restaurant.

Day 5: Montalbano Elicona-Hotel Nebrodi (hours of riding: 6)
After setting off from Montalbano we will ride along the valley in a westerly direction and then climb towards the village of Floresta, the highest settlement in Sicily (at nearly 1300 metres), which we will ride through before stopping for a picnic lunch nearby. In the afternoon we will enter the Nebrodi Natural Park.  This is one of the most beautiful and breathtaking parts of the trail, which takes us to the northern side of Monte Colla.  Here we will find our accommodation, the old summer residence of the Vagliasindi barons, nestled in a very remote and tranquil spot, which cannot be reached other than by off-road vehicle.  Here we will have supper and spend the night.

Day 6: Hotel Nebrodi-Feudo Vagliasindi (hours of riding: 5)
After setting off from the Hotel Nebrodi we will begin to descend through the Nebrodi forests to the source of the famous Alcantara River, passing the sanctuary of Santa Maria del Bosco, before arriving in the area of Randazzo, another very old village, where we will stop for a picnic lunch.  In the afternoon we will continue along the Alcantara Valley and arrive at our luxurious accommodation, Feudo Vagliasindi, another former country residence of the Vagliasindi barons (whose main residence was the Palace of Randazzo), which produces one of the best Etna DOC wines.  We will ride around the vineyards and visit the old cellars, where it is possible to taste the vineyard's prize-winning wines.  We will have supper and spend the night here.

Day 7: Feudo Vagliasindi-Castiglione di Sicilia (hours of riding: 5)
For this final leg of the trail we will ride almost exclusively through the Alcantara River Natural Park, famous for its basalt rock formations, formed by ancient lava flows from Mount Etna which followed the river's path and have been moulded by the river's flow over the centuries.  After leaving Feudo Vagliasindi, we will descend towards the Alcantara riverbed, which we will follow to the agricultural village of Moio Alcantara, sitting in a fertile plain and dominated by an extinct small volcano.  We will then reach the Malvagna Gorges, where we will stop for a picnic lunch.  In the afternoon we will continue though the Natural Park, passing the Castiglione Gorges and the Cuba Bizantina, a small Greek-orthodox church which dates back many centuries.  We will then arrive back in Castiglione di Sicilia, where everything started six days before, and where we will have supper and spend the night.

Day 8
After breakfast you will be transferred to the airport (or another location on the island, as requested). 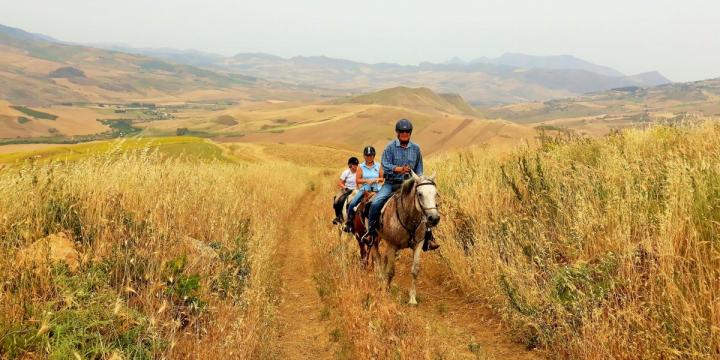 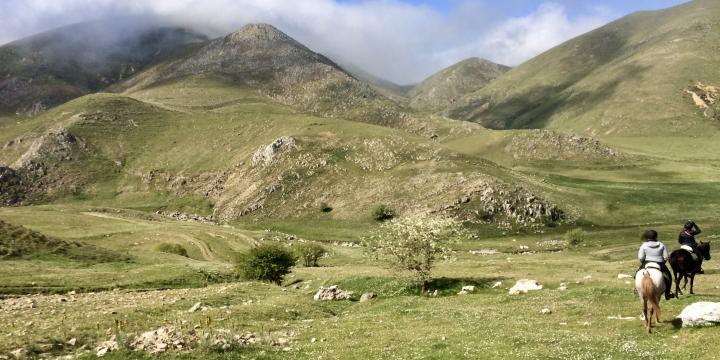 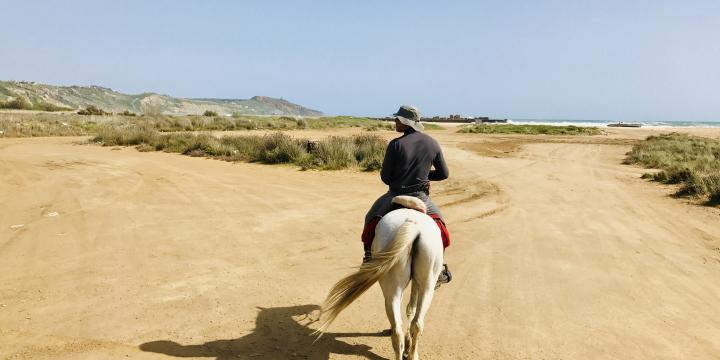 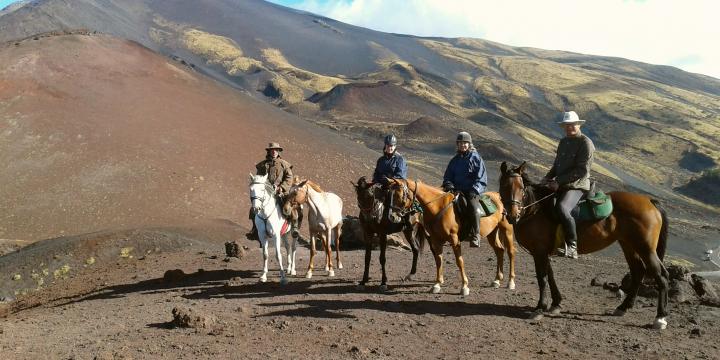 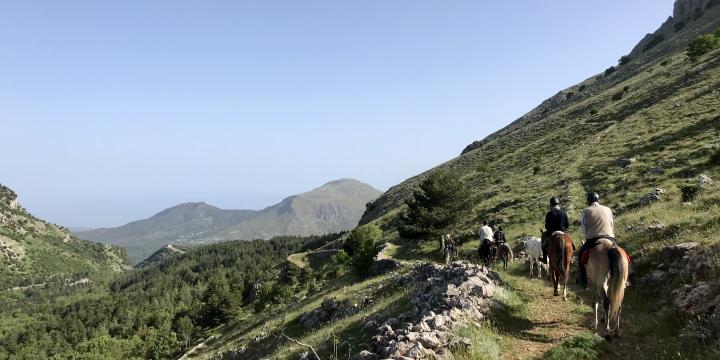 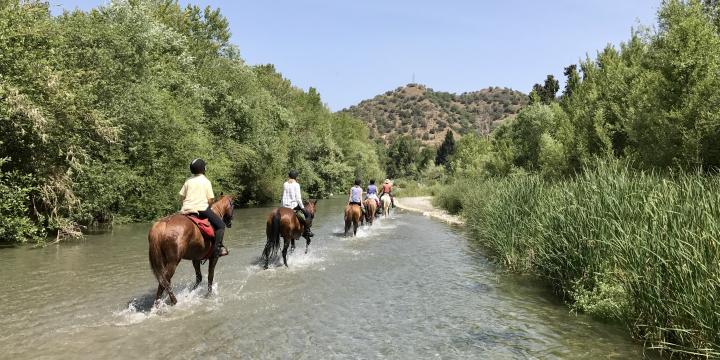 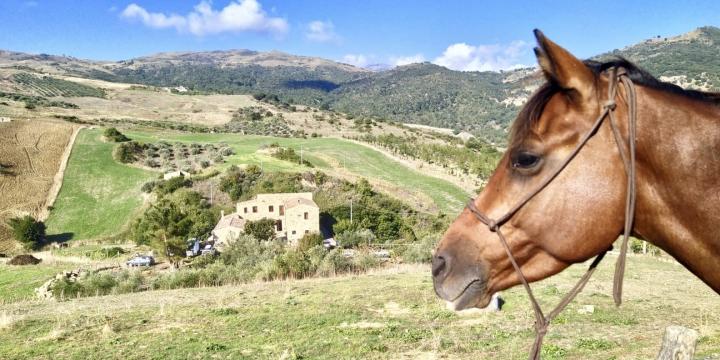